For the last two years the Solar Energy in Armenia considerably grew due to Net Metering Regulation, which the Government adopted in 2017. Many businesses and households have already taken advantage of the use of solar energy and really felt the profitability of this idea. This is especially beneficial for energy-intensive facilities such as gas compressor stations and various manufacturing enterprises. Agricultural farms are also not far behind, but unfortunately not all potential is used here.

In Armenia, solar panels have already begun to be installed on the roofs of agricultural buildings such as for example wineries and cheese factories, but it turns out that solar panels can be installed not only on the roofs of buildings but also on the cultivated lands where the plants are grow, or on the crops and here there are a lot of advantages. This concept is not new, it was proposed by y A. Goetzberger and A. Zastrow in 1981 (Goetzberger A, Zastrow A. “On the Coexistence of Solar-Energy Conversion and Plant Cultivation”, International Journal of Solar Energy 1, no. 1. 1982; p .55–69) . Today, after A. Goetzberger and A. Zastrow, the coexistence of agricultural farms and solar stations on the same area is usually called Agrophotovoltaics (sometimes Agrivoltaics or APV).

The most significant project designed to prove the ideas of APV is APV-RESOLA (https://www.agrophotovoltaik.de ), which was announced by Fraunhofer ISE and financed by the German Federal Ministry of Education and Science and FONA (Research in the Field of Sustainable Development).

This project evaluated the benefits of producing both solar power and crops on arable land near Lake Constance. The partners in the project installed a solar system of 194 kW on a five-meter-high structure on land used to grow winter wheat, potatoes, clover and celery․This project began in 2015, and the final results of the study should have been presented this year, but there are already very encouraging data. Particulary, the project showed land use efficiency of 160% in 2017 and up to 186% in 2018. According to the authors of the experiment, the results of 2018 were better due to a very hot summer. This is very hopeful for us, because summer in Armenia is usually very hot.

It is clear that each crop has its own needs for solar energy and water for normal ripening, but scientists from Froaunhofer concluded that for each plant at any latitude it could be developed it’s own suitable solar power system providing the necessary balance of light and moisture.
In fact in the “Sunlight for plants – Sunlight for energy generation – Water” balance, Agrivoltaics delivers eco – friendly solutions:

The end results: a better crop yield and more efficient performance of the solar array. 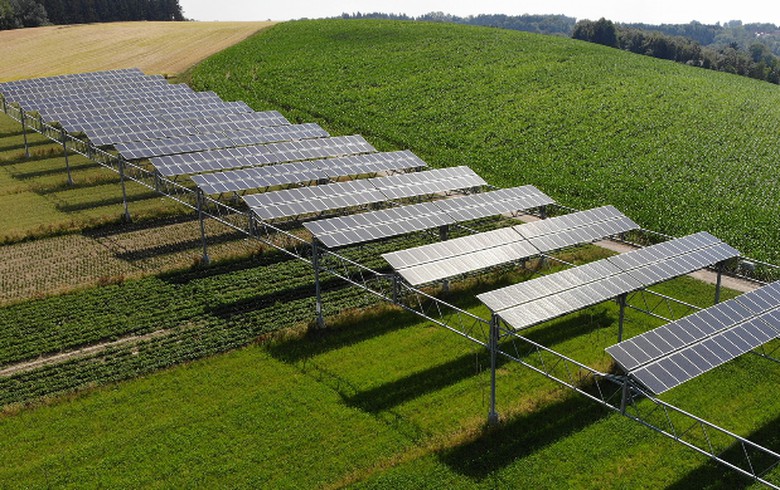 As a bonus, we will also have an electricity directly on agricultural land, which will make possible to use agricultural machinery that works not on fuel but with green electricity. This is a great advantage for our farmers who will no longer be interested in the price of diesel fuel.

Next great advantage is that solar panels in some way protect plants from hail, which is also important in our region. 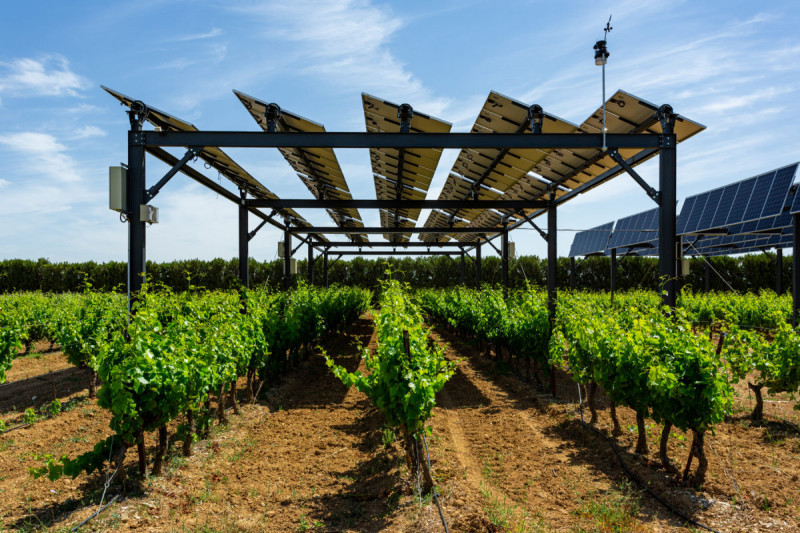 Let’s think now. We have about 480,000 hectares of cultivated land in Armenia, and if only 1% of this land, we will use basis on APV principle, installing 1 kW of solar panels on every 24 sq.m. then we will have 2 GW of installed solar panels, which at the moment is 50% of the country’s electric capacity.

Finally, it makes sense to think about how appropriate it is to build large utility scale solar stations on new territories, which we do not have so much, when energy security problems can be solved by installing solar panels on the roofs and cultivated land only.